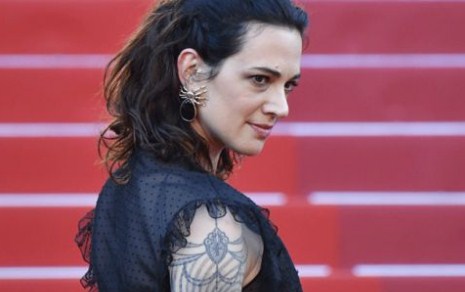 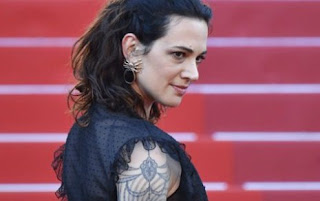 The Italian actress and director has accused Weinstein of rape.
Weinstein's spokesperson denied that "any individuals were targeted or suppressed at any time".
In his New Yorker story, Ronan Farrow alleged that the film producer employed two intelligence companies, Kroll and Black Cube, to try to collect information on several women and on journalists trying to expose the allegations.
Black Cube advertises itself as "a select group of veterans from the Israeli elite intelligence units". The New Yorker said they included former members of Israeli spy agency Mossad.
After the story was published, Argento tweeted: "Why didn't I, @rosemcgowan, @RoArquette @AnnabellSciorra speak up earlier? We were followed by ex-Mossad agents. Isn't that terrifying? Very."
Italian-American actress Annabella Sciorra, who starred in US TV series The Sopranos, and US actress Rose McGowan, have also accused Weinstein of rape. He has denied all allegations of non-consensual sex.
Farrow's report alleges that two private investigators from Black Cube, using false identities, met McGowan to "extract information" from her in an effort to stop the publication of abuse allegations. One of the investigators is reported to have posed as a women's rights advocate.
McGowan praised Farrow for his investigation, writing on Twitter that "your words will line the halls of justice".

In a statement, Black Cube told the New Yorker that it "applies high moral standards to its work and operates in full compliance with the law of any jurisdiction in which it operates". But the company declined to comment on the specifics of any work it may have done for Weinstein.
Sciorra told the New Yorker that the alleged use of private investigators by Weinstein had scared her "because I knew what it meant to be threatened by Harvey", adding: "I was in fear of him finding me."
The New Yorker also reported that one intelligence firm held a profile of actress Rosanna Arquette, who has also accused Weinstein of sexual harassment.
Weinstein's spokeswoman Sallie Hofmeister dismissed the report, saying: "It is a fiction to suggest that any individuals were targeted or suppressed at any time."